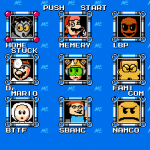 I am S.P. Sour, I go by SP_Sour on PSN. I am a Creative Director for T-Games on the Team Desk and run GemWay (saved a ton of space just putting "run GemWay") and contributed to this wiki under 'A Wikia Contributor' before I got an account, though that was only for a month or so I think.

I have known T-Games for longer than people might think, I found the GameMakes level one day when the GameExpo II Clear and GameWave II had just been released, and the GE II cartridge was still white.

I make games based on games from the 80s era. I also develop the Fun Machine and Super Player, and make music from video games. When I want to do so, I can make nice art.

Outside of T-Games, I collect retro video games and stuff. I have every game console Nintendo has ever released in North America, plus a Famicom and Super Famicom. Read more on my blog by clicking the My Website button up there. I also like building Gundam models and watching certain anime, some Cartoon Network stuff, Doctor Who (sometimes), Parks & Rec(finished). My strongest fandom placement is Homestuck, definitely. (I really love Back to the Future though.) Check out my hosted Opinion Page, my poll ideas,  and my T-Fiction! I've also tried to categorize T-Games into TVTropes tropes, though that page is a bit dated.

I'm one of few people to have a T-Games Network card. It's not rare; just oft-ignored.

In other barbage, I was one of 88 people to win the Real Grade Set from Bandai's Gundam Midyear Campaign 2013! Blog post on that here.

Blog post on its delivery (my personal blog, not my wiki one) here.

My favorite pages (Some articles I created, plus the article on a console I created)

Sorry, I had to put this somewhere -DD


SP_Sour is a Community Manager, second-party developer and a long-time fan of T-Games and the development team's works. His creations for T-Games have included games, accessories, and fan-makes of T-Games consoles; the most notable work being the NeXBOX, a fork of the NeXT which included only the main features necessary for the NeXT to function. This fan-make was the primary inspiration for the official NeXT Shadow.

He is also a T-VIP member with a Platinum subscription and is one of the few developers to receive a software development kit for the GameExpo III beta.

His more notable games are:

Retrieved from "https://trixelcreative.fandom.com/wiki/User:S.P._Sour?oldid=11347"
Community content is available under CC-BY-SA unless otherwise noted.