View source
watch 01:36
We're Getting Mutants in the MCU - The Loop
Do you like this video?
Play Sound

Puddles D. Duck (also known simply as Puddles) is a fictional character in comic series The Grandiose Tales of Cpt. Stuffy, based in the same fictional universe as Restitched. Puddles serves as the sidekick to Cpt. Stuffy, owned by Charlie Dior. Puddles is owned by Eloise Dior, and his actions are a representation of Eloise's imagination. 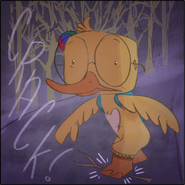 Puddles stepping and breaking a stick and displaying his nervous disposition 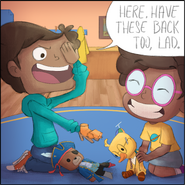